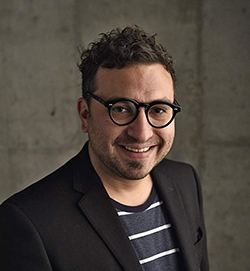 Alonso is a Mexican film and stage director and writer. He studied at the Royal Academy of Dramatic Arts (RADA) in London. His first feature GÜEROS won over 40 international prizes in festivals around the world, including Best First Feature at the Berlinale 2014, Horizontes Award and Audience Award at San Sebastian, and awards at the AFI Film Festival, Tribeca, Havana, Morelia, Lima, among others, as well as 5 Mexican Academy Ariels - including Best Picture.

His previous shorts CAFÉ PARAÍSO, THE CÚ BIRD ́S LAST SONG, and last year’s VERDE have appeared in the Official Selection at TIFF, Clermont-Ferrand, London Film Fest, Tribeca, and have won over 20 prizes around the world.

He lives in Mexico City where he works with his theatre company Todas Las Fiestas de Mañana. He’s trying to be more patient with his sons Martín and Tomás.